It was right there, in black and white: “Intermediate outcome (3–5 years): Ending of anonymous shell companies, foundations, and trusts.” In a strategy that clearly recognized that success would be incremental and even anecdotal, this impossible goal was hard to miss.

The strategy was that of the Transparency and Accountability Initiative, a collaborative of leading funders targeting greater transparency, participation, and accountability for the public good. We both joined the initiative in 2016—Michael as Executive Director and Megan as a new representative of Open Society Foundations. The 2017–19 strategy that sat in front of us was all but a fait accompli—including that casual, intermediate goal to end anonymous shell companies.

Every strategist and evaluator alarm bell was ringing. No one working on this topic (including the then five TAI donor members) thought it possible to completely end the practice of hiding the true owners of companies on a 3–5-year timeline—if ever. And what would TAI and its funder members actually do directly to advance this aim? Private philanthropies and donors support others working on issues but rarely are they involved in directly changing norms and legislation or building movements. So, how did funder practice and the collaborative’s work connect to complex, field-level goals?

More worrying was the fact that this unattainable outcome was a mere interim goal in just one of four strategic pillars; it was a commitment not only to delivering the impossible but to doing so as stepping stone towards an even larger, loftier ultimate outcome (in this case, more inclusive and equitable tax governance at global and national levels). Intermediate outcomes should be things that are “just out of reach;” in this case, the outcome was so far beyond reach as to be effectively out of sight.

TAI’s resident strategists and evaluators, Megan and Alison Miranda, did what they could, expressing concern, offering advice, and joking together that at least the outcome would be easy to evaluate. Michael, meanwhile, worried about being held to such an audacious field-level goal given TAI’s own emphasis on accountability and the carefully circumscribed scope of its remit (to foster collaboration between funders). Together, we committed to making sure future strategies would be clearer and not set us up for failure.

But, five years on, time (and an external evaluation using smart, retrospective evaluative approaches!) have made us reflect and reconsider.

Over the past six years, beneficial ownership transparency has gained significant ground, thanks in large part to the continued efforts of partners supported by TAI funder members. One particularly significant policy win was the UK’s introduction of a law requiring companies to file details about their beneficial owners with a newly created People with Significant Control (PSC) register. TAI funders and partners anticipated that this hard-won success would lead to a raft of similar legislation around the globe—and it did.

Having such a clear and public statement of ambition, articulated in terms that resonated with field partners and aligned to their own advocacy goals, encouraged TAI funder members to pay the issue of anonymous ownership more attention—and to commit new funds. Compared to the three years previous, the number of grants made by TAI members to BOT nearly doubled over the life of the strategy (from 45 to 84), representing more than $21 million in new funding between 2017 and 2019.

The independent evaluation of TAI’s beneficial ownership work confirmed that grants were indeed the most important funder contribution. But it also found that partners valued the more flexible, longer-term funding and the technical assistance, convening, direct advocacy, and capacity building support that TAI members provided. Here, we can also trace the influence of ambitious goal-setting, which motivated TAI funder members and the Secretariat to work even harder. They not only contributed more funds but also provided more flexible, multiyear support and leveraged other assets at their disposal (convening power, technical capacity, and advocacy expertise) to engage other funders, advocates, and policymakers on aligned issues—from illegal fishing to people trafficking.

From a monitoring, evaluation, and learning (MEL) perspective, many of the pitfalls we anticipated did play out. Of course, measuring progress towards transparency is never simple: the task itself is to expose and put a stop to deliberate, centuries-old secrecy. And with an intermediate outcome that was in many ways as ambitious as our ultimate aim—and more specific, leaving little room to hide—it was difficult to make a reasonable assessment of progress. Moreover, without articulating a clear relationship between funder practices and the field-owned progress towards ending anonymous practices, the strategy didn’t invite or enable us to understand our role in collective progress or learn how or where to improve what we do.

Big ambitions that help us to reimagine and reorient collective action have a home in strategies, but where? And how? In a decades-long and highly political quest, such as ending anonymous shell companies, we need a theory of change that identifies tangible, time-bound, and context-specific milestones—steps along the way to achieving longer-term change. In the best-case scenarios, you have these and a strategy to actively and productively challenge assumptions and biases along the way.

In the table at the end of this blog, we reimagine the language and framing of TAI’s strategy on tax and beneficial ownership in ways that might have more successfully articulated the visionary ambition and defined concretely what success would have looked like.

Looking to the future, TAI’s new strategy does have an accompanying MEL plan and it is suitably aligned to the sphere of TAI influence—starting, for example, with measuring funder collaboration and behavior change. We have learned and adapted. And yet we find ourselves hankering a little for the hubris and ambition of the “unattainable goal”. In the case of beneficial ownership, it’s undeniable that this commitment made a difference in how TAI funder members pursued work and commitments.

In the context of a collective endeavor—like a funder collaborative, where risks are shared—there is all the more reason to dream big. And if ever there was a moment that demanded ambition and risk taking, this would surely be it. The world is facing existential threats including deepening inequality and a rapidly changing climate. Financial secrecy practices of the ultra-rich and corporations need to remain front and center, making our unattainable goal perhaps more important than ever. 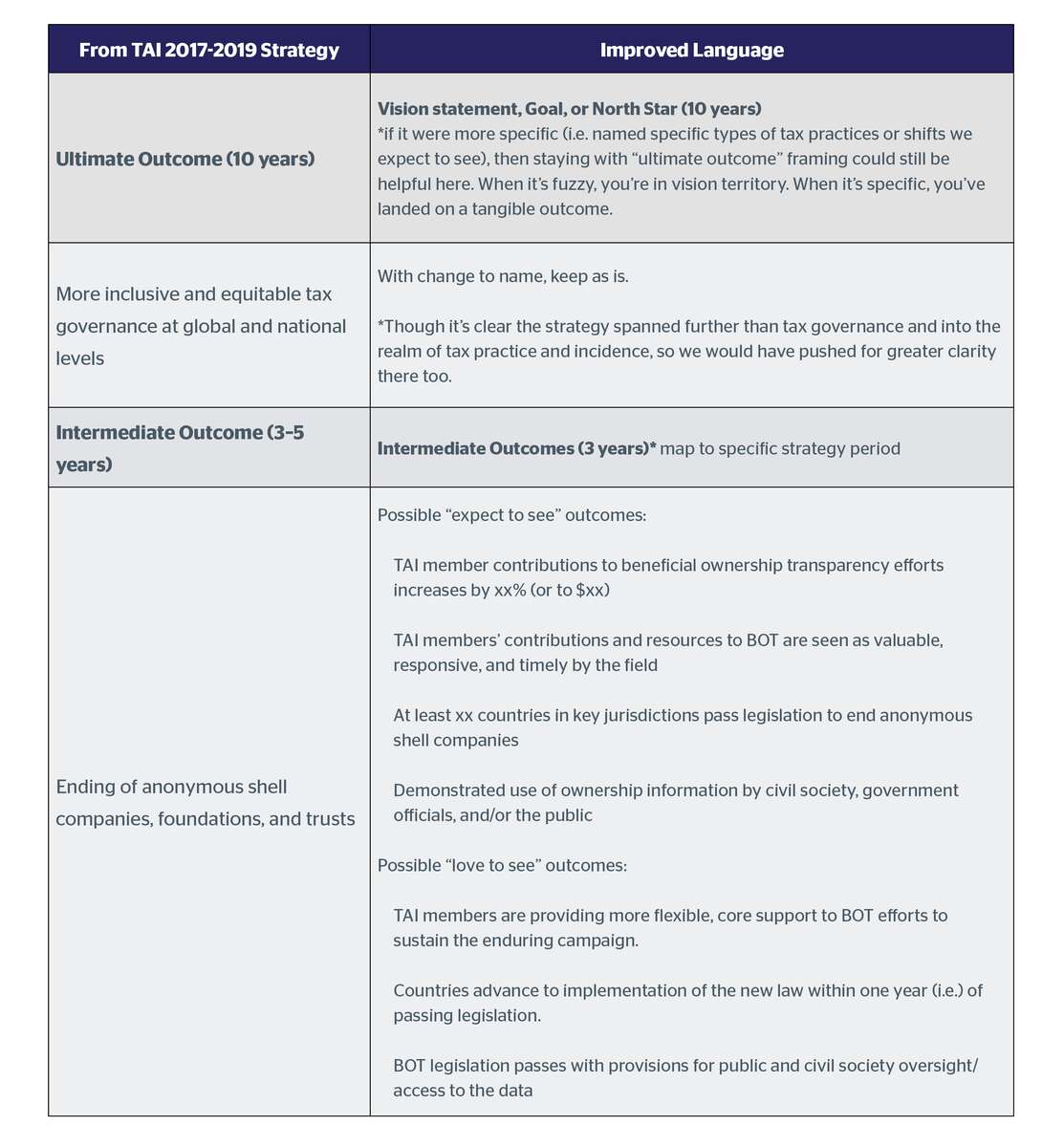 Why end anonymous shell structures? Anonymous shell companies, trusts and foundations are the getaway cars of corruption and illicit behaviors. They enable a variety of ills from tax evasion to money laundering to trafficking. To counter these practices, governments and citizens need to know the true beneficial owners of these structures, i.e. those who ultimately own, control, or benefit from a company, trust or foundation and the income it generates. Beneficial ownership transparency (BOT) is increasingly recognized as an integral element of anti-corruption and tax justice efforts – a far cry from a decade ago when the concept was still little recognized and very limited in practice. 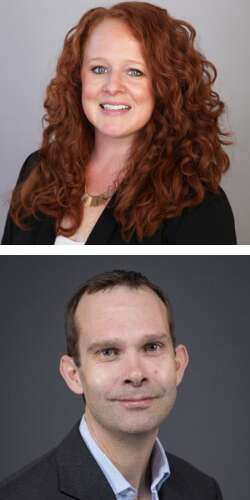 Megan Colnar is the director of strategy and impact for the Open Society Economic Justice Program. Megan believes strongly in the power of evidence to inform solutions to combat extreme inequality and injustice in the world. In her current role, she applies this principle by designing and leading strategy, monitoring, and learning; organizational resilience; and innovation for the Economic Justice Program. Prior to joining Open Society, Colnar was the global director for monitoring, evaluation, and learning at The Hunger Project, where, among other innovations, she led advancements in mobile data collection and designed the Women’s Empowerment Index. She is a recognized expert in evaluation methods and practices across sectors with over 10 years of field and international experience in more than 3 countries for private, public, and nonprofit organizations. Megan received her MPA in development practice from the School of International and Public Affairs a Columbia University in 2012 and was named a Thomas J. Watson Fellow in 2008 studying “In Peaces: Nonviolence & Reconciliation Movements” in six countries. She also holds a BA in international studies and Latin American studies from Rhodes College and specialized in post-graduate training in knowledge management, contribution tracing, and principles-focused evaluation.

Michael Jarvis is an expert in good governance, multi-stakeholder approaches and responsible business. He leads the Transparency and Accountability Initiative - a collaborative of funders supporting transparency, participation and accountability efforts around the globe. In past roles, notably at the World Bank, he incubated new initiatives ranging from collective action against corruption to a business alliance against malnutrition to the Open Contracting Partnership that promotes better outcomes from the estimated $9.5 trillion in public-private contracts globally. Michael has authored multiple publications and is a frequent blogger. In pre-pandemic days he could often be found in obscure music venues, missing past days as a radio DJ.