Giving While Learning: How Regrantors Enable Every Funder to Advance Racial Equity…Starting Now

In response to the converging social and public health pandemics last year, people organized, voted, donated, and resisted, all united by the desire to transform reality into a more equitable future. This showed up in philanthropic giving through an unprecedented surge of commitments to funding for racial equity.

But it will take more work to move from intention to impact.

In order to transform the lives of the more than 100 million people in America living in or near poverty—or 1 in 3 people, including nearly half of the people of color in the nation—we need fundamental shifts in our culture, policies, programs, and institutions to finally serve everyone. To achieve those systemic changes without racial disparities will require a well-capitalized movement for equity.

According to an analysis by the Philanthropic Initiative for Racial Equity, as of the summer of 2021, Candid had identified more than $8.8 billion in pledges for racial equity work in 2020, of which only about $3.4 billion in grants had actually been awarded. As of time of publication, this represented just 3.3 percent of the total of foundation and corporate giving for the year, based on Giving USA projections. Even if all the money pledged were deployed, equity movement leaders worry that it would be insufficient to address the historical undercapitalization. Just as important, funding for racial equity also needs to be sustained.

Understanding how funds are aggregated and deployed is a critical piece of infrastructure for a movement that is hoping to win. Imagine if we could finally get funding to align with equity leaders to work in transformative solidarity—the potential is an ecosystem effectively designed to build an equitable nation for all.

One of the concerns raised by equity movement leaders in the research that PolicyLink and The Bridgespan Group recently published, Moving from Intention to Impact: Funding Racial Equity to Win, is that funding may not be going to the full range of work that is needed to support transformative change. Fortunately, giving through regrantors, who are in community with organizations doing that important work on the ground addressing root causes, can help funders interested in achieving lasting impact.

“The uncomfortable truth is that philanthropy itself is often one of the biggest obstacles to transformative work,” says Farhad Ebrahimi, founder and president of the Chorus Foundation, an equity-driven funder active in funding social movements. “It is possible to fund the right things in the wrong way.”

However, given the urgency of the inequity that we face and the reality that racial equity journeys are continuously ongoing, it is impractical for funders to delay funding so they can learn first. Instead, they should invest while learning.

Regrantors often have the relationships and capabilities to deploy significant philanthropic capital in a way that models much of what is needed to make lasting progress—a long-term lens and trusting relationships with leaders of color and grassroots organizations. Proximate leaders and peer funders can both support funders and keep them accountable as they pursue this work.

Contrary to popular misperceptions, there is also no shortage of opportunities: in a 2021 Bridgespan survey, funds focused on racial equity reported that they could absorb up to $3 billion annually without any increase in operating capacity. This finding reinforces the messages in a recent open letter to philanthropy from the Groundswell Fund, co-signed by more than 400 racial equity funders, calling for “a significant transfer of resources into the control of institutions where people of color, who are primarily accountable to their communities, have the ultimate decision-making power over where dollars go.” We agree and urge funders to capitalize regrantors and intermediaries who are led by people of color, focused on racial equity, and accountable to communities of color.

Funders should also think about what their learning while giving might look like: is this learning through the observation of the choices that regrantors make versus regular conversations with staff and/or leadership? And be mindful that funder’s wishes for learning may not coincide with every regrantor’s model.

There are many practical steps that funders can take that would collectively add up to major shifts in the way the movement for equity receives support. Providing funding to regrantors and learning alongside them is a critical way to get started. And the time is now to fund racial equity to win. 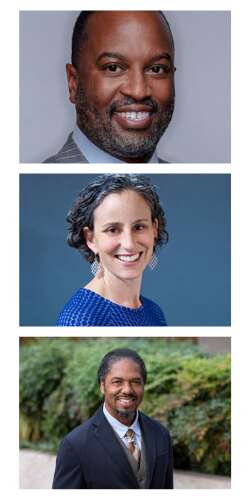 Michael McAfee is president and CEO of PolicyLink. He became CEO after serving for seven years as the inaugural director of the Promise Neighborhoods Institute at PolicyLink. Before joining PolicyLink he served as senior community planning and development representative in the Chicago Regional Office of the US Department of Housing and Urban Development (HUD) and as the director of Community Leadership for the Greater Kansas City Community Foundation and Affiliated Trusts.

Laura Lanzerotti is an advisory partner at The Bridgespan Group and the head of Innovation and Impact. She leads Bridgespan’s work in innovation strategy and collaborative processes, with a strong focus on designing for equity and inclusion. She led the research team responsible for the joint PolicyLink-Bridgespan analysis of the state of funding for racial equity published in July 2021.

Marcus Walton is president and CEO of GEO. He joined GEO after more than decade of practice in both nonprofit management and ontological learning model and has a long history of racial equity facilitation and training. Previously he was Director of Racial Equity Initiatives for Borealis Philanthropy and has also served as Vice President and Chief Operation Officer for ABFE.