Cross-post: We Need to End Structural Racism and Inequities. How can Data and Evidence Help?

These were the aspirations of a teen George Floyd, whose killing at the hands of police has renewed protests to draw attention to police brutality against Black people. While his death is symbolic of systemic racism in policing, Floyd’s life and story also crystalize our collective failure as a nation to provide equitable opportunities to ensure that Black children can live to make their dreams come true.

George Floyd’s story is all too familiar for those of us who work in the education and social sector. Like many working families in America, the Floyd family struggled with deep poverty and food insecurity. He was the first of his siblings to graduate from high school and go to college. But — like many first-generation, low-income students of color — he faced obstacles to completion. A high school friend told The Houston Chronicle that “the strain of college weighed on Floyd because his mother was struggling financially, and he was trying to support her and put himself through school.” There were many setbacks after that, including frequent brushes with the criminal justice system, but Floyd was determined to forge a better life, and he mentored young men in the housing project where he grew up to do the same. He went to Minneapolis to seek the services of a nonprofit that provides substance use recovery and job training services. But working multiple low-wage jobs while attending a training program for commercial driving left him exhausted, according to his instructor, and he stopped attending. Weeks later, he was killed when allegedly spending a counterfeit $20 bill to buy groceries.

Floyd’s life, and his death, provide vivid examples of all the ways we are failing to address the historical and systemic racial and economic disparities in education, health, housing, income, wealth, policing, criminal justice, and public safety — disparities that have been exacerbated by the pandemic. This moment calls for us to respond to the demands for change with bold solutions that can deliver real outcomes for our Black communities and for people of color, and data and evidence can be important tools to accelerate and measure progress.

While the current supply of evidence-based programs and policies that provide meaningful solutions for Black and Brown communities is thin, we can expand and optimize our use of existing evidence to guide policies and investments toward better outcomes.

We know that stronger safety net programs — like childcare subsidies, supplemental nutrition assistance, health care benefits, paid family leave, and cash assistance, among others — play a key role in keeping low-income workers and their children from poverty by helping them weather economic shocks (like a job loss) and invest in skill-building. We know that there are some program models — in prenatal and infancy home visiting, K-12 education, pregnancy prevention, community college, workforce training, and employment — that have demonstrated positive outcomes for Black people and for other groups of color. For example, the transitional job and employment support model implemented by the Center for Employment Opportunities has been proven to decrease recidivism in participants for at least three years. We also know that many education and social programs fail to produce long-term outcomes for the most marginalized because they are not equipped or empowered to provide comprehensive supports to replicate a safety net (for example, providing stipends to attend skills training that reduce a participant’s need to work). 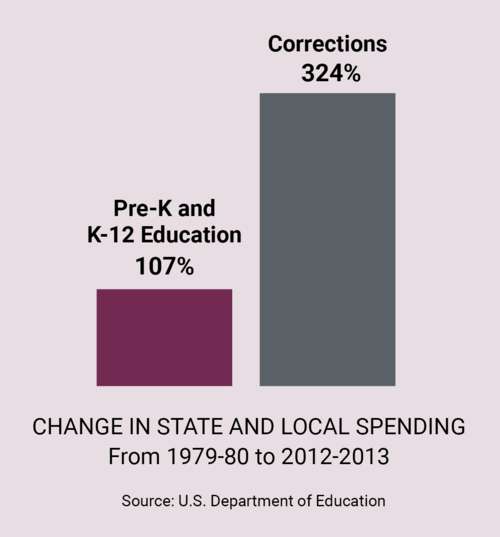 Despite the evidence, our policies and spending have not prioritized equitable outcomes for Black people, people of color, and people living in poverty. Over the last three decades, state and local spending on prisons and jails has risen more than three times faster than spending on schools. The weakening of our social safety net since welfare reform and increasing administrative barriers to accessing supports — which were shaped by individual and systemic racism (see: “welfare queen”) — have increased the involvement of police in education and other areas, like responding to mental health emergencies or managing homelessness. Community-based nonprofits deliver a sizable chunk of social services in this country, but they are seldom reimbursed for the full cost of providing services.

There are growing calls to reimagine public safety by tackling the root causes of poverty and criminalization, and redirecting investments toward housing, health, education, employment, and asset-building outcomes for historically disinvested communities. We can use existing evidence to target these investments for a stronger safety net and programs that start to mitigate some of the racial disparities in well-being and economic mobility.

Lack of rigorous evidence should not slow the pace of urgent systemic reforms in policing and criminal justice, but building evidence of these reforms will be necessary to measure progress toward reducing racial disparities and to ensure outcomes for Black and Brown communities in the long run.

There is limited empirical evidence that community policing initiatives reduce crimes on their own, or that instituting procedural accountability mechanisms (like use of body cameras or implicit-bias training) changes policing outcomes for Black and Brown people. In this context, some are calling for immediate harm reduction through a comprehensive set of policies that restrict police use of force, while others are calling for large-scale divestments in the police. 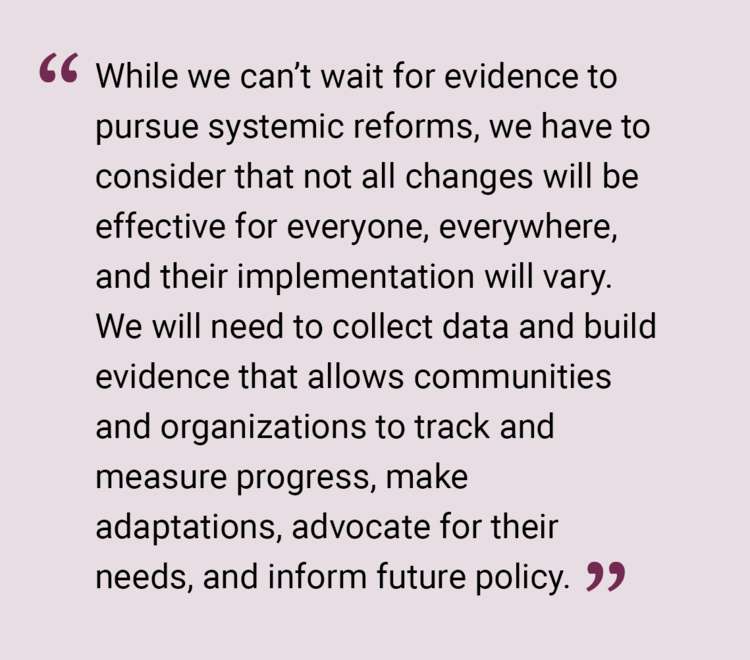 We don’t know exactly what will be most effective, but we do know that things are not working now (and haven’t been working for a long time). We can’t delay structural reforms in policing and criminal justice by demanding evidence that could be years in the making because lives are on the line. Lack of evidence for changes proposed by communities should not be an argument for inaction: most policies that are upholding the status-quo are not based on evidence and are resulting in negative consequences for Black and Brown people, and the inadequate supply of evidence is a direct result of systemic disinvestment in building actionable evidence. We need quick action from federal, state and local governments that are informed by community voices, needs, and context, along with the evidence that we do have.

While we can’t wait for evidence to pursue systemic reforms, we have to consider that not all changes will be effective for everyone, everywhere, and their implementation will vary. We will need to collect data and build evidence that allows communities and organizations to track and measure progress, make adaptations, advocate for their needs, and inform future policy.

To increase the supply of solutions that reduce racial disparities and produce outcomes for Black communities and for people of color, we have to change the way we fund, build, and share evidence. Evidence building should center the voices of the people and communities most directly impacted by the problems we seek to solve.

Evidence doesn’t just come from a formal impact evaluation or statistical analyses of quantitative data. Evidence is not just about answering yes/no questions (like does this work or not), but also about assessing needs and understanding what works for whom and why. Evidence is not about compliance, but about shared accountability, learning, and continuous improvement. What counts as evidence? Evidence is a combination of quantitative and qualitative data that can answer questions and drive decisions of different magnitude.

Like most of the systems in our society, the current evidence ecosystem is not equitable. Organizations and practitioners that serve marginalized communities are not empowered or equipped to build and drive their evidence agenda, and to decide what type of learning questions to pursue and when. Government and philanthropic funders rarely help nonprofits or public agencies build the critical capacity and infrastructure needed for ongoing R&D, learning and continuous improvement. The problem is particularly acute for small community-based nonprofits led by people of color, those that often serve the most marginalized people but are shut out of elite funding circles. For example, a recent report found that among groups focused on improving life outcomes of Black men, revenue at organizations with Black leaders was 45 percent lower than at groups led by whites. In addition, nonprofit leadership and boards remain overwhelmingly white. 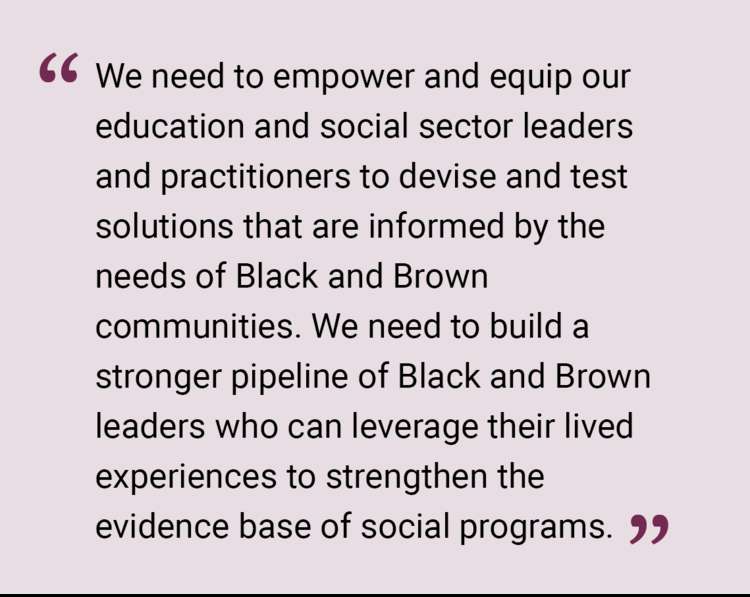 As we’ve outlined in a recent post, a stronger, more equitable ecosystem is necessary to increase the supply of solutions that reduce racial disparities. We need to empower and equip our education and social sector leaders and practitioners to devise and test solutions that are informed by the needs of Black and Brown communities. We need to build a stronger pipeline of Black and Brown leaders who can leverage their lived experiences to strengthen the evidence base of social programs. And we need to help leaders systematically incorporate the voices of Black and Brown staff and community members throughout the evidence-building process. This includes making decisions about what questions to ask, what outcomes to measure, how to collect and analyze data, and how to interpret evidence.

Racism is deeply ingrained in the fabric of our country, and a complex interplay of individual, institutional, and systemic racism fuel the inequities experienced by Black and Brown people. We recognize that the discussion presented here is not comprehensive, and that it does not address different types of racism that lead to different types of disparities for different groups of color (like disciplinary practices at schools and biases in employer hiring practices, among others). We also recognize that data has been used as a weapon to uphold the status-quo and discriminate against communities, including the use of racialized and subjective algorithms for calculating credit scores, determining eligibility for housing and business loans, and predicting criminal risk.

But we strongly believe that data and evidence can be powerful tools in changing the status-quo. In recent months, we’ve seen the value of data and evidence in exposing the systemic racism in policing, bringing national attention to the problem, and increasing accountability. We have more work to unleash the potential of data and evidence in the education and social sector to address racism and inequities, and this will require centering our work on the voices of our Black and Brown communities. 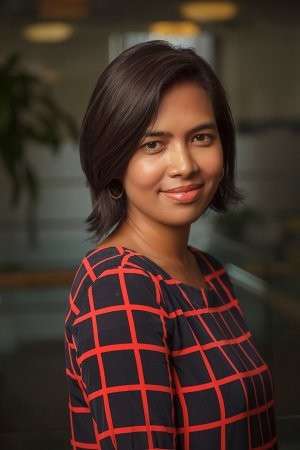 Farhana Hossain is an independent social sector consultant, and a Senior Evidence Advisor at Project Evident. In her role, she provides strategic planning and technical assistance services to organizations on performance measurement, outcome evaluation, data visualization, and communications. Previously, she served as a Research Associate for MDRC for 7 years, where she led mixed-method implementation research for the evaluations of youth and workforce development programs, and developed communications strategies and products to educate public and private stakeholders about evidence-based policies and practices. Prior to MDRC, Farhana was a data journalist for The Washington Post and The New York Times for more than a decade. Farhana holds an MPA in public and nonprofit management and policy from New York University’s Wagner Graduate School of Public Service.